The collection now has a number of different, red-fleshed varieties for further research. Not all of these may necessarily be accepted as perry pears. In common with most pears, there appear to be two forms, the early ripening softer, and the later ripening harder types. In Britain these are generally referred to as Blood – the earlier type and Beetroot, the later ripeners. In Germany and Austria, the earlier are called Sommerblutbirne, and later ripening Blutbirne. We have both these in the collection, but some have yet to fruit. In Denmark the equivalent early type is known as Rød pære. The Sanguinole is an early, red-fleshed pear of some antiquity now found in many parts of Europe. It appears to have originated in Italy. Edward Bunyard mentions that it could still be found in some cider orchards. 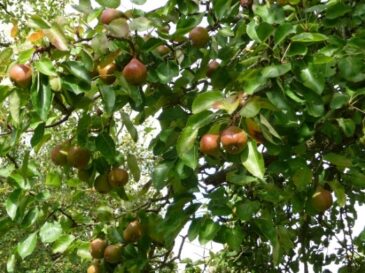 The equally ancient Italian pear Cocomerina, has recently been added to the collection, in the hope that it might throw some light on the origins of red-fleshed pears. The name Cocomerina comes from “cocomero” meaning watermelon, and refers to the pink colour of its flesh, especially intense in late-harvested fruits. The pears are said to be excellent for making jams and liquors.  This variety is cultivated at present only in the Apennine area of Romagna and Tuscany, but in Bosnia there is a group of red-fleshed pears known as Lubenicarka, (also meaning watermelon), which may be similar. In a research project organised by the Faculty of Agriculture, University of Banjaluka, the most coloured flesh was found in the “Krupna Lubenicarka” variety, which also had the highest content of anthocyans.

The wild (feral) pear from which perry varieties are believed to have originated as a result of natural hybridisation between Pyrus pyraster and Pyrus caucasica, most probably first appeared in the Caucasus, spreading through the Balkans across Europe. So, the red-fleshed varieties, if they had by then acquired their colouration, may have followed the same route. As would be expected, there are two cultivars of Cocomerina, an early-ripening one whose fruits are harvested in August, and a late-ripener harvested in October. This is very similar to the distinction between our Blood (early ripening) and Beetroot (late ripening) pears.

A report by the Department of Biomolecular Sciences, Section Plant Biology, University of Urbino, Italy entitled “Fresh Juices of Cocomerina Pear an Ancient and Rare Fruit with Red Pulp: A New Source of Polyphenols for Human Health” with research conducted by Laura Giamperi, Donata Ricci and Anahi Elena Ada Bucchini.

In their conclusions, they say: The results, while still in the preliminary phase, have shown that the fresh juice (especially the “cocomerina” pear late type juice) is particularly rich in polyphenols, anthocyanins and flavonoids and consequently showed significant in vitro antioxidant and anti-inflammatory activity when compared with other fruit juice. Our results confirm the importance of further enhancing the fruit trees which seem to have been forgotten, taking into account that often the old varieties are those most suitable for agriculture with a low environmental impact.

The National Perry Pear Centre has for a long time, drawn attention to the potential genetic value of local varieties, both on account of their resistance to many pests and diseases and for their possible contribution to the challenges of climate change. This Italian report also highlights the potential that red-fleshed pears might have to contribute to our own health and wellbeing! Anthocyanins are responsible for most of the red, blue and purple colours in fruits and are particularly abundant in berries, red grapes and red wine. The report also revealed that the later ripening Cocomerina pear in particular also had high anthocyanin levels in both its skin and flesh – considerably greater than in the earlier ripening variety. The consumption of products rich in anthocyanins has been shown to be associated with a lower risk of cardiovascular diseases. Anthocyanins also display inhibitory effects on the growth of some cancer cells.

In this country, the earliest reference found to red-fleshed pears is in John Parkinson’s Paradisi in Sole, Paradisus Terrestris of 1629, where he refers to the Blood Red Pear having a dark red colour on the outside but piercing very little into the inner pulp. John Rea in Flora, Ceres & Pomona 1665 refers to the Bloudy Pear, helpfully describing that although small and brown on the outside and blood red within. The Bloody Pear mentioned by John Worlidge in Vinetum Britaannicum 1691 does not describe the colour of the flesh, but that it has red juice. In 1752, Philip Miller in The Gardener’s Dictionary refers to Choak Pear – so acrid that it produces a choking sensation, whose flesh is red, but which is rarely cultivated. This may be the first reference to a perry pear having red flesh.

Thomas Knight in his garden notebook (now in the Herefordshire record office) recorded his experiments and observations, which include the crossing of a white-fleshed Bergamot type pear with a red-fleshed Blood pear, referred to in his Treatise on the Culture of the Apple and Pear, and on the Manufacture of Cider and Perry 1797. A pear he called Carmine Core is mentioned by Herbert Durham in 1923, but without recording where it was found. The only red-fleshed pear mentioned in Luckwill and Pollard’s Perry Pears in 1963 was the Bloody Bastard from Staunton, which we have since been unable to trace. Long Ashton Research Station however also discovered two of the three examples of the Wick Court Beetroot pears in 1958. One they described as red-fleshed and one, pink-fleshed. They found that the colour did not remain after fermentation. Possibly this was because they used the earlier ripening Wick Court Eric (more properly a Blood not Beetroot pear), because Wick Court Alex produces a pink perry. A Beetroot type pear has also been found in an old orchard near Kidderminster and reports of other red-fleshed pears have been received.

In 2007 a pear, possibly the elusive Bloody Bastard of Staunton, was found in the neighbouring parish Hasfield. This, very early pear is also now in the National Collection, called simply Blood Pear. A considerably older matching tree has been found in neighbouring Ashleworth and an elderly lady recalls her father-in-law using it to graft the Hasfield pear. Whether this is the Bloody Bastard found in 1963 will however never be known.

To summarise, the red colouration of the flesh of some perry pears occurs in most parts of Europe. Its rarity suggests that the colour is generally lost when cross-pollinated with white-fleshed pears. Analysis showed that the anthocyanin content was radically greater in later ripening fruit and was actually enhanced by low temperatures. Content was still significant (though far less) in the unripe fruit of later ripening varieties and in fully ripe fruit of early ripeners.

« Rootstock Trial
In Search of the Turgovian Pear »